Benefit Concert in Chicago a Success

On Sunday, February 10th, a benefit concert of sacred a capella works took place at the Serbian Holy Resurrection Cathedral in Chicago.  The concert was organized through a local effort as a fund raiser in support of Petr Gudkov, a long-time singer with the Sretensky Monastery Male choir of Moscow who was been in Chicago since their last North American tour in the fall of 2012 to undergo cancer treatment.  The program featured sacred works by the hierarchical choirs of both the Holy Virgin Protection Russian Orthodox Cathedral under the direction of Dr. Michael Gill as well as the Serbian Singing Society Bronko Radichevich choir of the Holy Resurrection Serbian Cathedral under the direction of Elizabeth Neska.  Welcoming the audience, Fr. Darko Spasojevic, dean of the Serbian Cathedral underscored the importance of this event as a Christian manifestation of love for ones brethren.  In attendance were His Grace, Bishop Longin (Serbian Orthodox Church), Bishop Peter (ROCOR) and Bishop Nikolae (Romanian Orthodox Church) as well as the Consul General of Serbia and a great multitude of supporters from various churches and jurisdictions in the Greater Chicago area.  The concert was an overwhelming success raising around $9000 in donations towards medical treatments for Mr. Gudkov who is scheduled to undergo a bone marrow transplant next month.  More information on contributing to this cause can be found through RACS (Russian American Community Services) at http://www.racssf.org/ 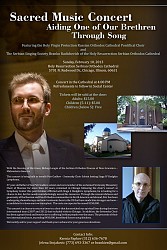