It was on the feast of the Exaltation of Cross in 407 A.D. that the slandered, defamed, persecuted, exiled, humiliated, utterly exhausted by long drawn-out sickness and inhumane treatment by his cruel guards, that Holy Hierarch John Chrysostom – the most eloquent homilist of the Church, great theologian, a forthright bulwark of righteousness – yielded up his spirit into the hands of the Lord Who receives our podvigs and bestows the crowns of glory on those who are faithful to Him till the end.

It took two months for the news of his death to reach the Imperial capital. But when on November 13/26 the Royal City did hear of the blessed repose of its archpastor, that day was marked as the saint’s memorial.

In our diocese there is only one temple consecrated in honor of the Golden-Mouthed John and it is cradled between the rugged slopes of the eastern Ozarks at a place called House Springs, which is a dozen miles west of St Louis.

This year the festal services were celebrated by Dean of Arkansas, Kansas, Missouri, and Oklahoma, Archpriest Sergii Alekseev, Priest Thomas Nichols – a clergyman of St Basil the Great parish in St Louis, Archdeacon Sergius – a member of the monastic community of the Holy Cross Hermitage in Wayne, WV, and Deacon Ephraim Galloway (of St Basil’s Church). Among those assisting at the services was Subdeacon Ephraim, also from the Holy Cross Hermitage. The members of St Basil’s choir and those who live near St John’s church sang beautifully in English, Slavonic and Georgian.

After the Vigil service on Friday night the sisterhood offered a tasty fasting meal. The next day began with the Lesser Blessing of the Water, followed by the Divine Liturgy and the Cross Procession. At the Augmented Litany of the Divine Liturgy, a special petition was said for the health and salvation of our ruling hierarch Archbishop Peter, Archimandrite Seraphim (the abbot of the Holy Cross Hermitage) and Archpriest Christopher Stade (who served as the rector at St John’s for many years). After the Cross Procession on that brisk late November morning, an abundant and delicious luncheon was offered by the sisterhood for the clergy and the pilgrims, for some of whom this feast was their first visit to St John’s.

It is worth noting that for the monks from West Virginia the services were especially moving, since it was at House Springs that their now renowned Holy Cross monastic community was established by Hieromonk Kallistos (Pazalos) in 1986. Although Archdeacon Sergius and Novice Ephraim are too young to be from the original brotherhood, nonetheless, for them being able to serve on the grounds which witnessed the monastic labors of their elders was priceless.

May God, through the prayers of Holy Hierarch John Chrysostom, give strength to those who honor the holy temples, who withstand the attacks of temptations and who, being strong in their obedience to the Holy Church, can repeat after the Golden Mouth his last words on the Earth: “Glory be to God for All Things!” 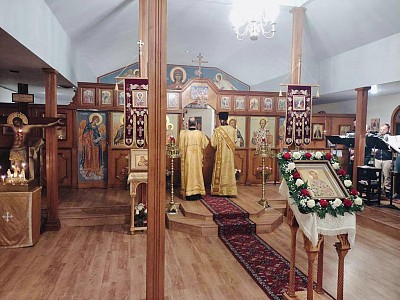 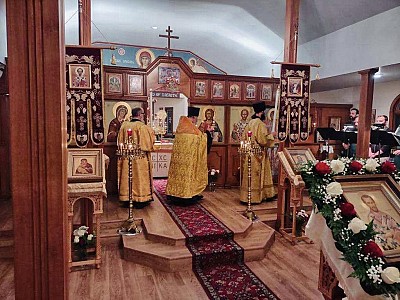 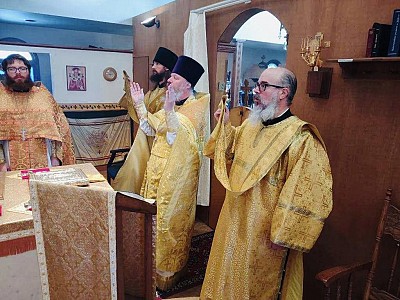 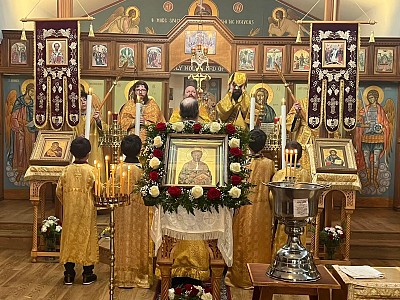 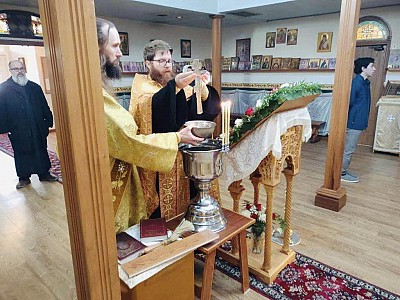 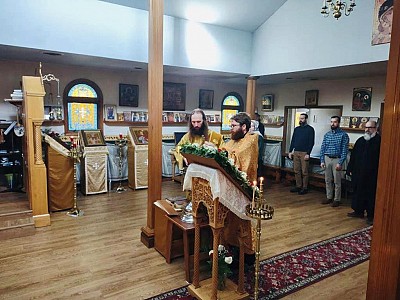 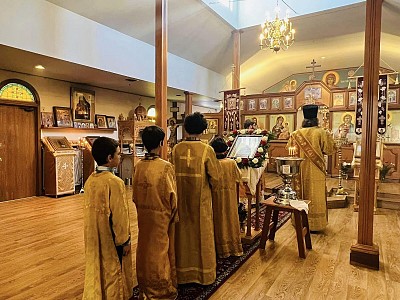 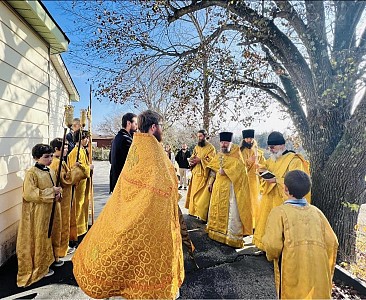