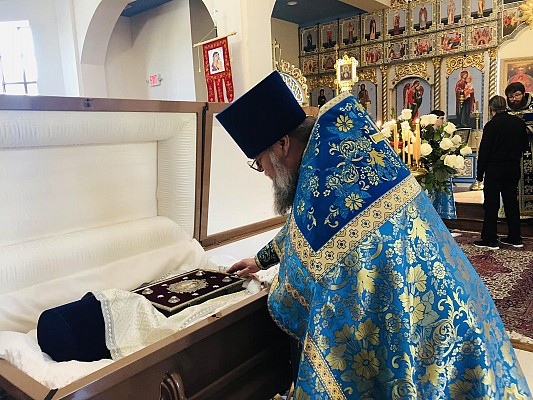 On September 7/20, the eve of the great feast of the Nativity of the Theotokos, Archpriest Martin Swanson, the founder of St Basil the Great Orthodox Church in St Louis, MO, the founder and the first Dean of our diocesan Pastoral School, the former Dean of the Fifth Deanery and the Rector Emeritus of St Basil’s Church, finished his earthly sojourn. He would turn 82 years old on the feast of Protection of the Mother of God.

Fr Martin had suffered a stroke on July 5 of this year and since then was in recovery and undergoing physical therapy. Even though many doubted its possibility, Fr Martin was talking about returning one day to the Holy Altar, even if pushed in a wheelchair. Not being able to serve seemed unnatural for him – who selflessly served God as His priest for 37 years. Yet, the Lord judged that it was time for His servant to repose from his labors and from the burden of sickness.

The funeral for Fr Martin took place on the feast of the Translation of the relics of Venerable Sergius and Herman, the Wonderworkers of Valaam, Saturday, September 11/24. The diocesan ruling hierarch Archbishop Peter arrived from Chicago to preside over the solemn services. Fr Martin’s relics, for this is how the breathless remains are referred to in the Book of Needs, were brought to St Basil’s Church on Friday and a Litia for the Departed was served immediately and then – a Panihida. Then the Vigil was served by Archpriest Gregory Joyce (St Vladimir’s Church, Ann Arbor, MI), the secretary of the diocese, and St Basil’s clergy: Archpriest Sergii Alekseev (Rector of St Basil’s), priest Thomas Nichols and Deacon Ephraim Galloway. Before the anointing at Matins, Archbishop Peter spoke to the faithful about a unique characteristic of the Russian Church, to wit a large number of saints who were not Russian ethnically (e.g. Venerable Anthony of Novgorod (Italian), Righteous Procopius of Ustyug, the Fool-for-Christ (German), etc.). Vladyka acquainted those gathered that there is strong belief that Venerable Sergius and Herman of Valaam were Irish, for there was in fact a monastic connection of Ireland with the Russian North. This allusion indirectly points to the newly-departed Archpriest Martin Swanson, by whose casket Vladyka sermonized. Fr Martin’s father was Scandinavian, while his mother was Spanish; it is beyond any doubt that they would have never imagine that their California-raised son would one day become a Russian Orthodox priest whose labors would bear fruit hundredfold. Following the Vigil, a fasting meal was served for all present. When everybody left the church, members of the parish brotherhood stayed to read the Gospel over Fr Martin for the entire night.

During the clergy communion, Archpriest Gregory Joyce spoke about Fr Martin and how he used his talents in his labor for the glory of God. There are few people who are talented in seemingly everything, while talents of most are limited. When Fr Martin was ordained deacon, the bishop who ordained him heard Father’s voice at his first litany and was evidently displeased. The old man beckoned to the newly-ordained deacon and, once the latter approached with trepidation, pronounced: “Next day you will be a priest”. Father knew that he could not sing, but this did not stop him from chanting when needed. When he sang a Magnification at Vigil, no one could sing along with him. This, however, always left him unfazed. If it had to be done, he would do it, regardless of what others thought of it.

The Funeral for the Priest was served immediately after the conclusion of the Liturgy. It was preceded by the reading of the Epistle of His Eminence Metropolitan Nicholas, the First Hierarch of the Russian Church Outside of Russia, to the rector of St Basil’s, to Fr Martin’s widow Matushka Katherine and the faithful of the parish on passing away of Fr Martin. In his letter, the First Hierarch spoke warmly about Fr Martin, his labors on building up the community from its “humble beginning in a garage” to “a beautiful new church”. His Eminence assured the rector, widowed Matushka Katherine and the entire parish “that the clergy of the Mid-American Diocese and the entire Russian Church Abroad are with you in their prayers”. This epistle was then given by Archbishop Peter to Matushka Katherine.

Archpriest Daniel Marshall (St George’s Church, Cincinnati, OH) jointed the other clergy for the Funeral. The parish choir, under the leadership of Carol Surgant, alternated the hymns with the clergy. The church was full, as besides the local faithful and friends, there were visitors from far away, those for whom Fr Martin was very dear. After the Absolution Prayer was read for the newly-departed, Archbishop Peter asked for all to pray for the repose of the soul of Fr Martin, as such prayers are especially important during the first forty days since passing. At the conclusion of the Funeral Rite, the priests lifted the casket up on their shoulders and the former rector thus made a procession around his church for the last time.

An unexpected thing happened after the procession. Usually, when the procession, having circled the temple, reaches its front doors, the casket is loaded into the hearse to be taken to the cemetery. However, when the procession was over there was no hearse in sight. While everyone was waiting for the carriage and since the day was rather hot, Fr Martin was carried into his church once again, now for the last time. After this breach of protocol, with the hearse finally by the church doors, Litia was sung and the casket with Fr Martin departed to his final resting place at Holy Cross Monastery in Wayne, WV. Now the clergy and the faithful could sustain themselves with a hearty meal prepare by the parish Sisterhood.

The following day, on Sunday evening, the hearse entered the grounds of Holy Cross Monastery. Under the starlit sky the casket was carried into the monastery church where a Litia was served and the Gospel was read over Fr Martin through the night.

According to the plan, Fr Martin was to remain in the monastery church till 9:30 A.M. and to be lowered into his grave at 10:00 A.M. Here again the prearranged plans were violated. When everyone was waiting for the departure to the cemetery, the funeral director and a hieromonk in his dirt-splattered working cassock appeared with a tape measure and started sizing the length of the casket. “The grave is not long enough”, the whisper was heard. So, Fr Martin stayed at the church for additional 30 minutes, just like he did back in St Louis.

After all this, accompanied by the beautiful singing of the monastic choir, the casket with the remains of Fr Martin was finally lowered into the grave on the monastery cemetery to await the Second Coming of the Lord Whom he selflessly served and to Whom he led many souls.

Memory Eternal to the tireless worker in the Lord’s vineyard! 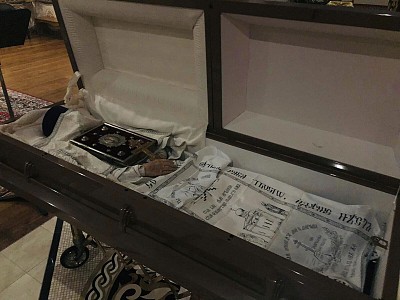 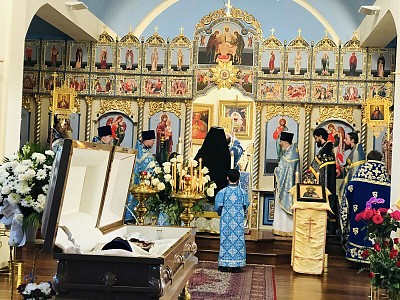 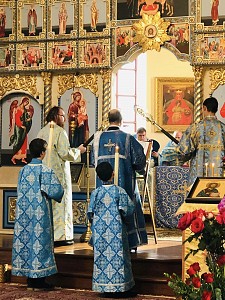 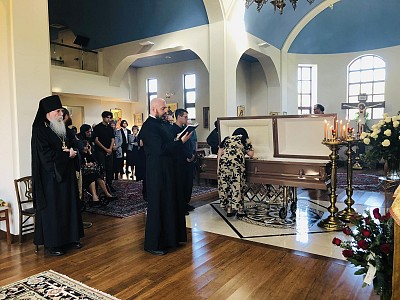 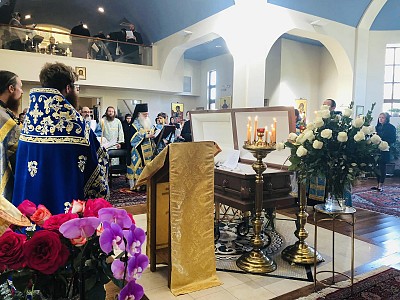 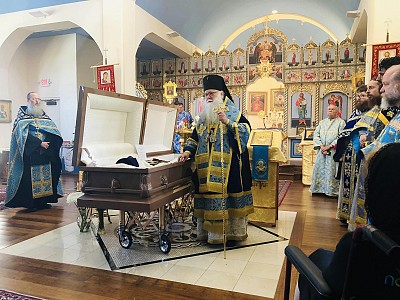 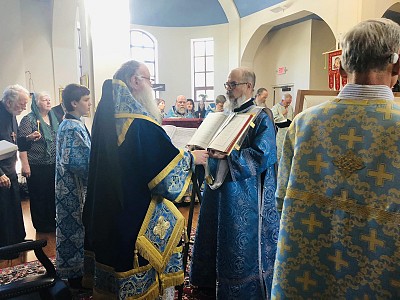 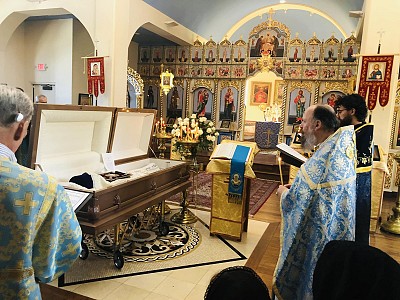 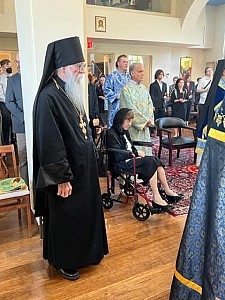 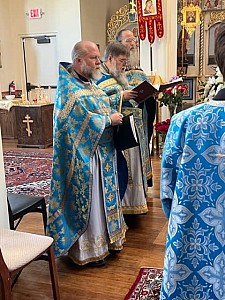 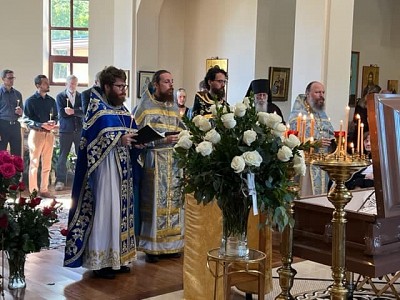 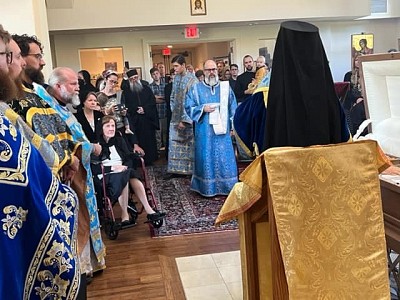 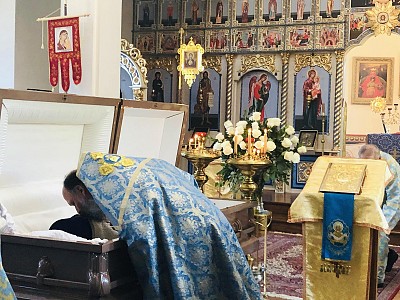 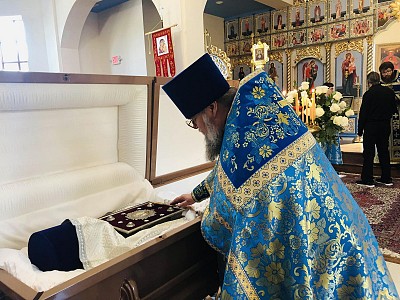 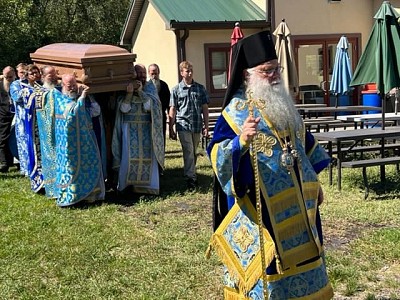 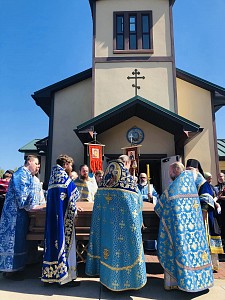 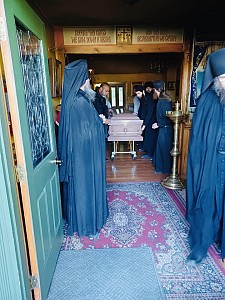 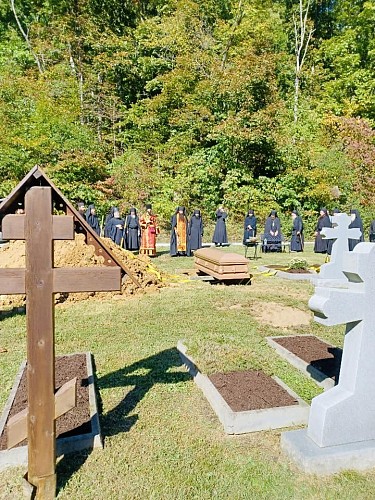