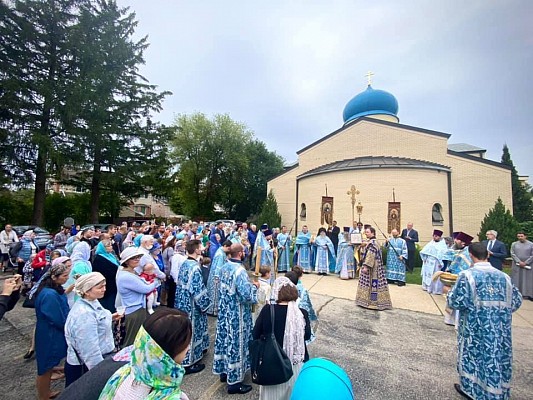 The diocesan cathedral of the Mid-American Diocese, located in Des Plaines (Chicago), Illinois, celebrates its annual patronal feast day on the Protection of the Mother of God, October 1/14. This year’s feast took place as the pandemic waned, but because of the uncertainties surrounding the disease, the diocese did not hold its annual Pastoral Retreat for the feast. Rather, Archbishop Peter invited all who would like to come to take part in the Divine Services and did not mandate participation of the clergy.

His Eminence led the Vigil and the Divine Liturgy for the feast, along with clergymen from throughout the large diocese, which encompasses 16 states from the Canadian to the Mexican borders. At the small entrance Priest John Komarsichuk, Rector of the St. Panteliemon parish in Minneapolis, Minnesota, was awarded the right to wear the kamilavka for his diligent service to the Holy Church.

Following the Divine Liturgy, at which almost all present partook of the Holy Mysteries from three chalices, the traditional cross procession was held. Having returned to the interior of the temple, “Many Years” was intoned for the Patriarch, Metropolitan, and Archbishop Peter, as well as the cathedral choir celebrating its patronal feast of St. Roman the Hymnographer. After the kissing of the Cross the parish sisterhood welcomed all present to the cathedral hall for a festive meal. The clergy and the faithful lingered there long into the afternoon, especially recalling the first feast of the Protection of the Mother of God which took place at the newly built cathedral 30 years previous.