Memory of New Hieromartyr Peter, Metropolitan of Krutitsy, Locum Tenens of the Patriarchal Throne Was Celebrated in St Louis 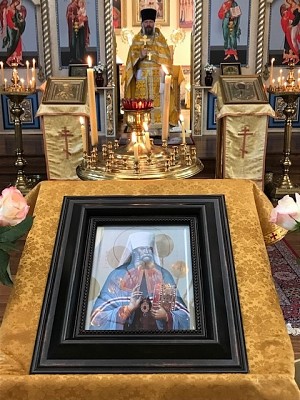 On any given day, the Church Calendar provides us with a list of names of the saints whose memory is celebrated that day. The number of daily commemorated saints can vary from a handful to more than a dozen. The first half of the 20th century proved to be very generous in swelling the calendar of saints with hundreds of new names – the New Martyrs and Confessors of the Russian Church. For the reasons of chronology, the newly-revealed saints are mentioned towards the end of the daily list of saints; and the Church liturgically celebrates usually those saints whose names appear on the top of the list: Old Testament patriarchs and prophets, apostles, martyrs, holy hierarchs, venerable fathers and mothers and the righteous ones – those whom the people of God were honoring through many centuries. To make an exception from this rule one should have a good reason.

Sunday, October 10th, the Church Calendar, while listing several saints who have been revered through the centuries, includes the name of New Hieromartyr Peter, Metropolitan of Krutitsy (†1937). Hieromartyr Peter can be numbered among most important hierarchs of the Russian Church of the post-revolutionary years. Patriarch Tikhon in his Last Will, which was read at his burial, suggested to the fullness of the Church that Metropolitan Peter be his locum tenens, that is, that he would be the temporary First Hierarch of the Church till a new patriarch is elected at the Church Council.

The holy hierarch proved to be a worthy disciple of Patriarch Tikhon, continuing the work of the latter on trying to acquire the legal status for the Church and on defending her from the attacks of the so-called “Living Church” – a Bolshevik-promoted schismatic group, which actions were marked by secularization of the church life and aligning it with the communist ideology. Hieromartyr Peter assumed his position of locum tenens in April of 1925, only to be arrested in December of the same year and never see freedom again. The holy sufferer endured manifold humiliations and privations during his long years of imprisonment and exile. When reading his life, one is left with the impression that the godless authorities with some sadistic pleasure tried to make every day of the life of the already feeble old man even more unbearable. But amidst this brutality, Metropolitan Peter remain steadfast as a true hierarch of Christ.

Till the news of his martyric death, the imprisoned hierarch was commemorated at every Divine Service as the patriarchal locum tenens both in Russia and in the diaspora – wherever the faithful children of the Russian Church found themselves scattered upon the face of the Earth.

On Saturday evening, October 9th, St Basil the Great Russian Orthodox Church in St Louis, Missouri, served a polyeleos service to New Hieromartyr Peter, Metropolitan of Krutitsy, and Sunday morning, at the end of the Divine Liturgy, a short moleben was served to the new hieromartyr, including a prayer before the icon of the saint. After the Dismissal of the Divine Liturgy, “Many Years” and “Save him, O Christ Our God” were intoned and sang for our ruling hierarch His Eminence Peter, Archbishop of Chicago and Mid-America, who was named in monasticism in honor New Hieromartyr Peter of Krutitsy.

It is the first time that such a service (when New Hieromartyr Peter is the only saint commemorated on Sept. 27/Oct. 10) was served not only in our diocese, but – perhaps – in the entire world.