The Third Day of Archbishop Peter’s Visit to Svyatogorsk

On October 3, on the third day of his stay in the Svyatogorsk Lavra, Archbishop Peter of Chicago & Mid-America concelebrated with Metropolitan Arseny of Svyatogorsk, who led the Divine Liturgy at the Dormition Cathedral on the 15th Week after Pentecost.

Bishop Innokenty (Shestopal), the brothers of the Svyatogorsk Lavra, and Archpriest Tarasiy Maximtsev, a cleric of the Holy Virgin Protection Cathedral in Chicago, who is accompanying Archbishop Peter on his trip to Ukraine, took part in the cathedral service.

During the service, Metropolitan Arseny preached on the theme of how the modern Christian should understand the Gospel words addressed by the Savior to his disciples: “If any man will come after me, let him deny himself, and take up his cross, and follow me.” (Matt. 16:24).

At the conclusion of the Liturgy, Metropolitan Arseny addressed the faithful with an archpastoral word, which began: “On this Sunday, when the Church celebrates a small Pascha ... with special joy we comfort ourselves with the concelebration of Vladyka Peter, Archbishop of Chicago and Mid-America. Vladyka comes to us after a long journey, but he came here as to his family, to his close relatives, we are all relatives in Adam, we are all relatives in Christ, in the Spirit ... all the more that we are united by such a relationship: that Vladyka was a cell-attendant of St. John of Shanghai & San Francisco until the saint’s blessed repose…

For two days now Vladyka Peter has been sharing with us his memories that you cannot read in a book ... Vladyka from the bottom of his heart, with his feelings of love for the saint, speaks certain words, memories of his earthly life, which create such a mood as if St. John was present next to us". Further, Vladyka Arseny expressed his deep gratitude to Vladyka Peter for his visit to Svyatogorsk, for the opportunity for joint celebration of the Divine Services and communion of the Holy Mysteries of Christ, for oneness of mind and spirit, all of which is based on a uniting love for Christ.

Archbishop Peter of Chicago and Mid-America then answered, particularly sayig: “I thank God that today I managed to serve with Vladyka Arseny, the monastery's brethren and pray here with you, in this church, which, of course, Saint John visited with his parents more than once. Vladyka knew me from the day I was born, and I remember him from 1956, when I was a boy, and I always venerated him as a saint. In my free time from school, I traveled with him, worked as his cell attendant, helped in the altar, and today I feel a deep responsibility for fulfilling everything that I have learned from him.”

Vladyka Peter said that he had planned to be at the Svyatogorsk Lavra in early July, when the holiday was celebrated in Adamovka, but he fell ill after a torrential rain in Chicago and that plane ticket, which was purchased then, allowed him now to arrive at the Svyatogorsk monastery. At the end of his speech, Vladyka Peter thanked Metropolitan Arseny for the warm welcome, holy prayers and asked him to continue to commemorate him and his distant flock in Middle America, a vast diocese covering 16 American states from the Canadian to the Mexican borders. Metropolitan Arseny once again thanked Vladyka Peter, asked for his prayers and, as a sign of brotherly love, presented him with a prosphora with the image of the Mother of God, which covers both Holy Russia, and Orthodox Christians in America and throughout the earth, whereever they are scattered. Vladyka Arseny also presented a panagia with the image of St. Nicholas the Wonderworker of Svyatogorsk, whose image appeared in the caves of Svyatogorsk in antiquity, and which is distinguished by a special iconography of the image of the Savior and the Mother of God standing on the sides of St. Nicholas, as well as the image of St. Nicholas Church on the cliff.

The service in the Dormition Cathedral ended with the singing of many years and the kissing of the cross.

After the meal, at 1:00 p.m., Archbishop Peter of Chicago and Mid-America met with the brethren of the Svyatogorsk Lavra in the assembly hall of the monastery.

Vladyka greeted the brethren, thanked them for the warm welcome, gave details of the earthly life of St John (Maximovich), and dwelt separately on the discussion that had unfolded in the Orthodox world about whether Vladyka John had been a Fool for Christ. Archbishop Peter categorically rejects this speculation on the grounds that Vladyka John would never have allowed foolery directed at the high rank of bishop, and as a person who knew him well and was always near the saint as his cell attendant. Vladyka Peter explained all those cases that formed the basis for speculation about the feat of the foolishness of Saint John, for example, his walking barefoot. This is due to the painful condition of his swollen legs. During his ministry in Shanghai, he wore soft leather shoes, which Vladyka Peter kept and brought with him and gave to Metropolitan Arseny as a gift to the Svyatogorsk Lavra. Later, according to the story of Vladyka Peter, Saint John wore sandals for the same reason as the aforementioned soft shoes. Once, during a period of exacerbation of the disease, the doctor noticed a worsening after the evening service and forbade Vladyka John to serve the later Liturgy. But Vladyka John continued to serve the early service daily, on the grounds that the prohibition was imposed on the late service.

Then Vladyka told about another typical case, when after the Liturgy the assistant head of the community came up to clarify an economic issue and in response received something unintelligible, and left with surprise. The saint explained this and other similar cases to his cell-attendant: that during the divine service he completely withdraws into himself and concentrates on prayer, and comes to his senses at the end of the divine service only after some time, but not immediately. This has nothing to do with foolishness, it was simply his complete focus on serving God.

Further, Vladyka Peter spoke about the character of Vladyka John as a cheerful person, kind and humble, who lived by faith in Christ and in this he was strict with himself and others. He was especially strict during the Divine Services, in the altar of the temple he did not allow more than one third of hot water to be added to the Eucharistic chalice, made sure that during the Eucharistic canon all the priests approached the altar and read a prayer in an undertone along with him.

Vladyka Peter also related several details from the saint's childhood and youth. He received evidence from his mother, who was in correspondence with the bishop's sister, Maria Maximovich (married Lyubarskaya), who wrote that her brother Mikhail was very obedient, did not cause trouble for his parents, studied well at the Petrovsky Poltava Cadet Corps, and did not like only two subjects : gymnastics and dancing.

Then Vladyka answered the questions of the brethren, which concerned the teaching activity of St. John (he taught theology to seminarians in Serbia), the attitude of the saint to secular events and the participation of Orthodox Christians in them. Vladyka told about the incident of Vladyka's visit to the ball on the American "Halloween" and how it turned out for the members of his flock present there.

He also answered questions of interest about the details and peculiarities of Vladyka John's liturgical practice, about his daily schedule, about the peculiarities of the mentality of Orthodox Christians in America, about the language of Divine Services and sermons in the churches of the United States, about the languages that Vladyka John mastered perfectly: Russian, French, Serbian, less English, about famous names in American Orthodoxy, about the Vladyka John's student days according to his own account, about the veneration of the memory of St John in the USA, about the testimonies of miracles of healing through prayers to St John in different countries, about the preservation of the Russian language in Vladyka Peter's family and the difficulties of preserving it in Russian families in the USA.

The brotherly interaction with Vladyka Peter lasted for about two hours and ended with a common prayer.

On the same day, accompanied by Metropolitan Arseny, Archbishop Peter visited the Cathedral of Svyatogorsk and the old parish church of All Saints, where the bishops talked with parishioners and residents of Svyatogorsk.

Sunday ended with a visit by the US Orthodox delegation to the gateway to the Holy Protection Church of the Svyatogorsk Lavra.Vladyka Arseny introduced the guests to the history of the temple and its shrines.

An article in Russian and photographs of the day can be found at the Svyatogorsk Lavra web site: https://svlavra.church.ua/2021/10/06/tretij-den-prebyvaniya-arxiepiskopa-chikagskogo-i-sredne-amerikanskogo-petra-v-svyatogorskoj-lavre-foto-video/ 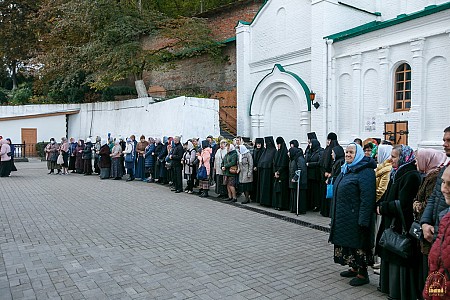 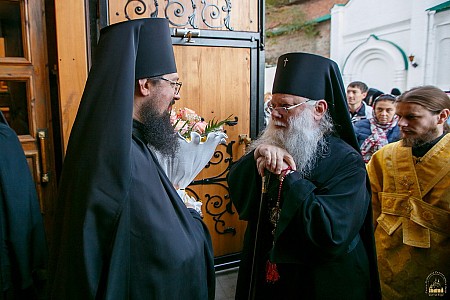 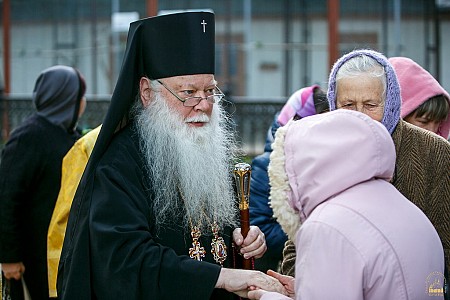 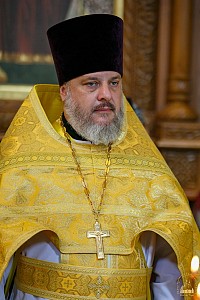 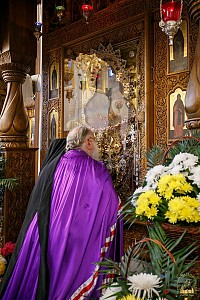 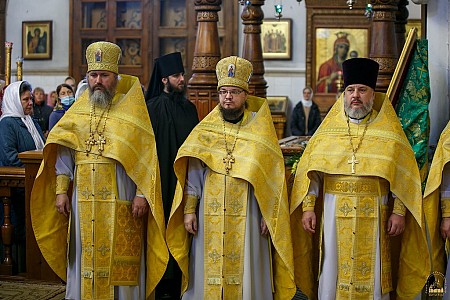 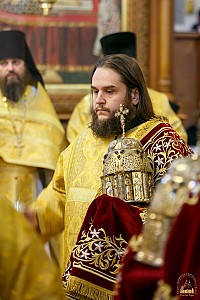 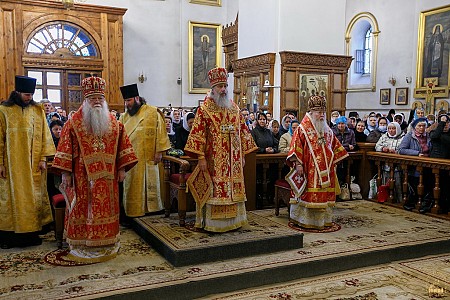 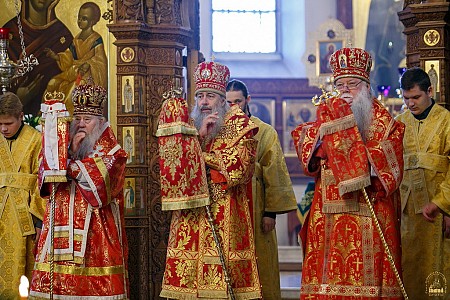 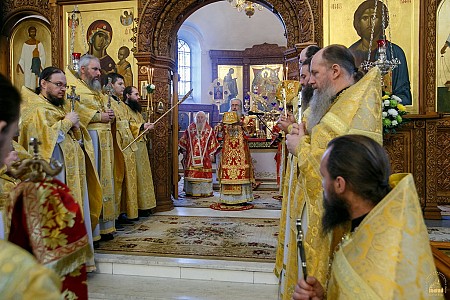 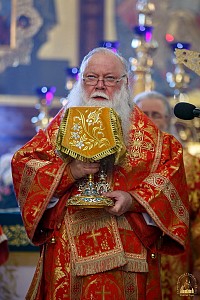 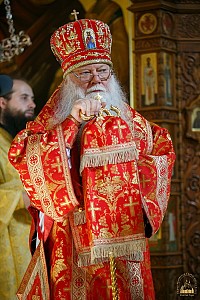 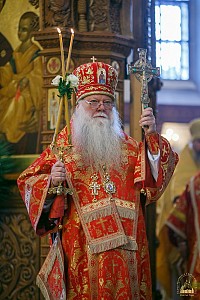 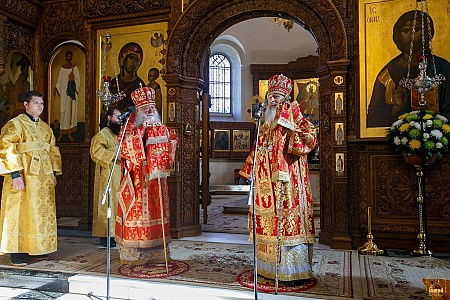 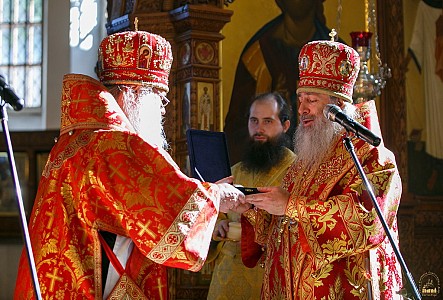 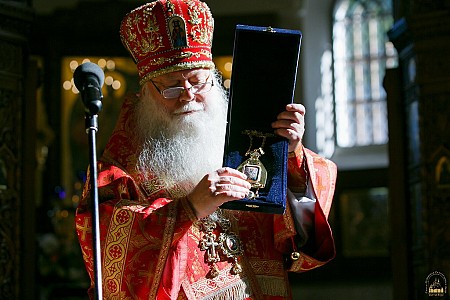 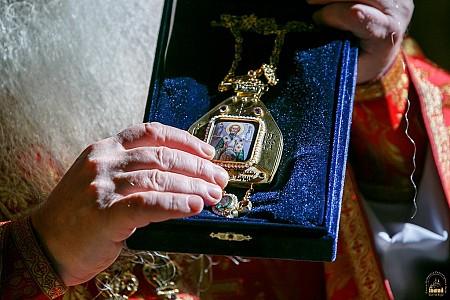 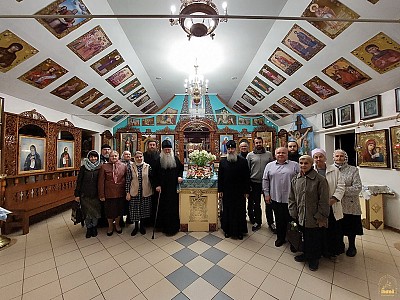 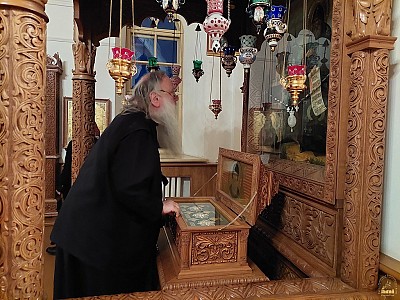 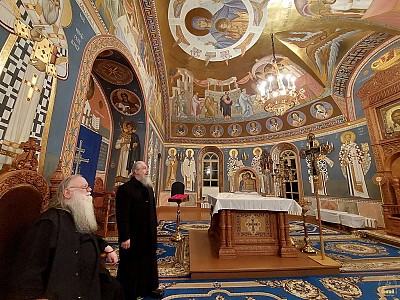 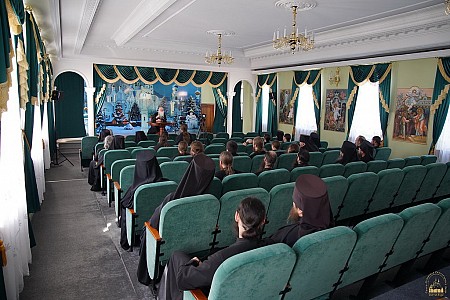 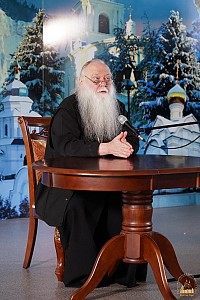 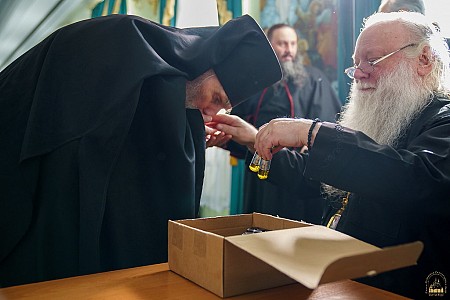 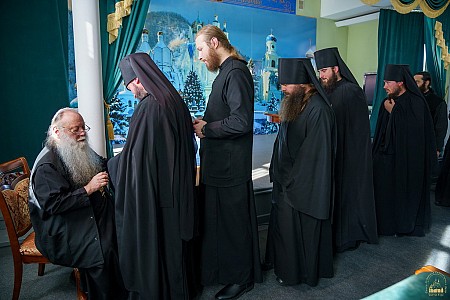 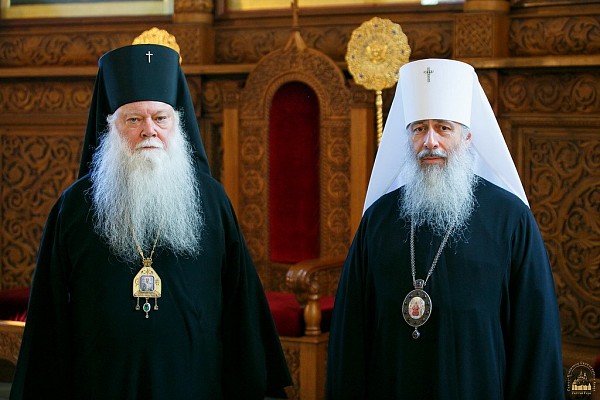