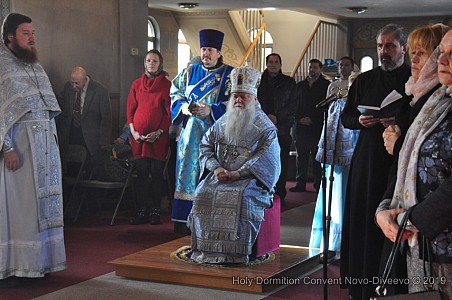 On Sunday, December 8, the Leavetaking of the Feast of the Entry into the Temple of the Most-Holy Theotokos, His Eminence Peter, Archbishop of Chicago & Mid-America, paid an archpastoral visit to Holy Dormition Convent "Novo-Diveevo" in Nanuet, NY, where he celebrated Divine Liturgy.

Present at Liturgy was a distinguished guest: Princess Maria Louise of Bulgaria, the daughter of Tsar Boris III (+1943) and Tsaritsa Ioanna (+2000) and older sister of Tsar Simeon II of Bulgaria. In honor of her presence, the litanies commemorated the Bulgarian Royal Family.

The choir sang beautifully and prayerfully under the direction of Matushka Maria Fedorowski.

Following a short sermon on the Sunday’s Gospel, Archbishop Peter spoke about how Bulgaria was one of two countries that helped Russians fleeing communism when the rest of the world looked the other way. It was through the efforts of the Bulgarian Royal Family that many Russians were saved prior to and during WWII.

Upon conclusion of Liturgy, His Eminence greeted the princess and presented her a prosphoron. After the service, a luncheon was served in the reception hall next to the cathedral, during which cordial interaction continued, particularly between the archbishop, the princess, and the convent’s rectress, Abbess Makaria, who talked at length about life at the convent.

Following the luncheon, Archbishop Peter and Frs. Alexander and Artem showed the princess Holy Dormition Church and the portrait of the Venerable Seraphim of Sarov, painted during his lifetime, as well as other holy relics kept there.

After the princess departed, the visiting hierarch visited with some of the residents of Novo-Diveevo, before heading back to the Synodal Headquarters in New York City.