Holy Transfiguration - ordination of Fr. David Companik to the priesthood and Subdcn. David Shephard to the deaconate 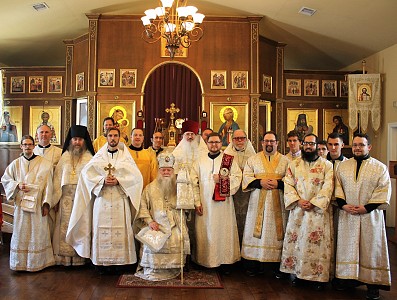 At the Small Entrance, Fr. Benigno Pardo was awarded the nabedrennik and the kamilvka. After the Great Entrance, Vladika ordained Deacon David Companik as a presbyter. Fr. David was born in San Bernardino, CA in 1987. Prior to his conversion, he was raised in the Reformed Presbyterian Confession. He was baptized in 2007, at St. Jonah, was married to Genevieve (Jennifer) in 2010, and they have 3 children (Jonah, Daniel, and Christina). He was ordained a deacon in 2012, and is a real estate agent.

After the Anaphora, Vladika ordained subdeacon David (Logan) Shephard as a deacon. Fr. Dcn. David was born in Michigan in 1989 and grew up attending St. Mary Magdalene Orthodox Church in Fenton, MI. He started serving as an altar boy at the age of 6 and was tonsured into the clergy as a reader at 14. Fr. David and his wife Sara married in 2014 and moved to North Carolina, shortly after which Fr. David was ordained to the subdiaconate. After two years of graduate study in chemistry they moved to Houston, where Fr. David is currently employed as a chemist with ExxonMobil. In February of this year Mat. Sara gave birth to their first child, a son named Luke.

Congratulations to the newly ordained Fathers David, and may God grant them both many years of service to the Church.

Photos are posted   at this parish Facebook page  and some more photots available here.