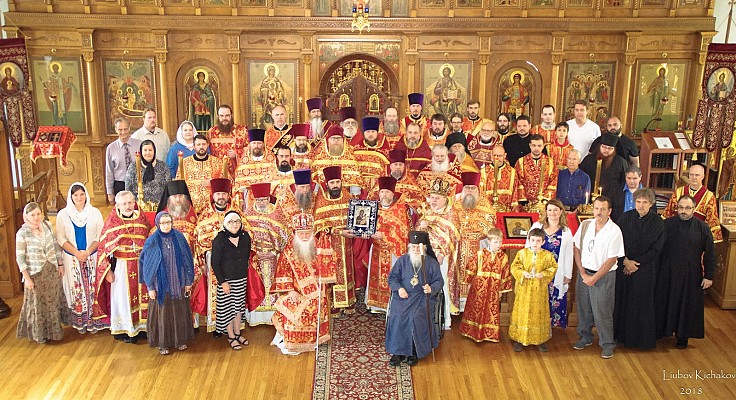 From June 12-16 2018 the triennial Diocesan Assembly of the Diocese of Chicago & Mid-American took place in Des Plaines, IL. Clergy and laity from throughout the 16-state diocese gathered to hear reports on the various activities of the diocese since the last assembly in 2015, to elect officers to serve on the Diocesan Council and Diocesan Auditing Committee from 2018 to 2021, to share fellowship and learn from best practices from throughout the diocese, and – perhaps most importantly – to celebrate the Divine Services daily. Each morning began with the celebration of Matins and the Divine Liturgy just as each day ended with the celebration of Vespers. During the day deliberations of the assembly took place. On Friday, June 15 and Saturday, June 16 the Divine Services were in honor of the New Martyrs of Russia, given the significant commemorations of the centenary of the Royal Martyrs this year. His Eminence, Archbishop Peter, who presided over the Diocesan Assembly as the ruling hierarch of the diocese, will be in Ekaterinburg for the commemoration of the regicide which took place there 100 years ago. The Hawaiian Icon of the Mother of God was present at the Vigil on June 15 and Liturgy on June 16, which was a source of great consolation and joy for the assembly delegates and all who were present at these services. The Divine Services during the assembly were sung by a choir made up of assembly delegates, while the Divine Services for the New Martyrs were sung by the choir of the Diocesan Cathedral of the Protection of the Mother of God. At the Divine Liturgy on June 16 ecclesiastical awards were presented to many clergymen for their sincere and diligent service to the Holy Church:

God willing the next diocesan assembly will be held in October 2021.

The Resolution of the Diocesan Assembly can be found here: