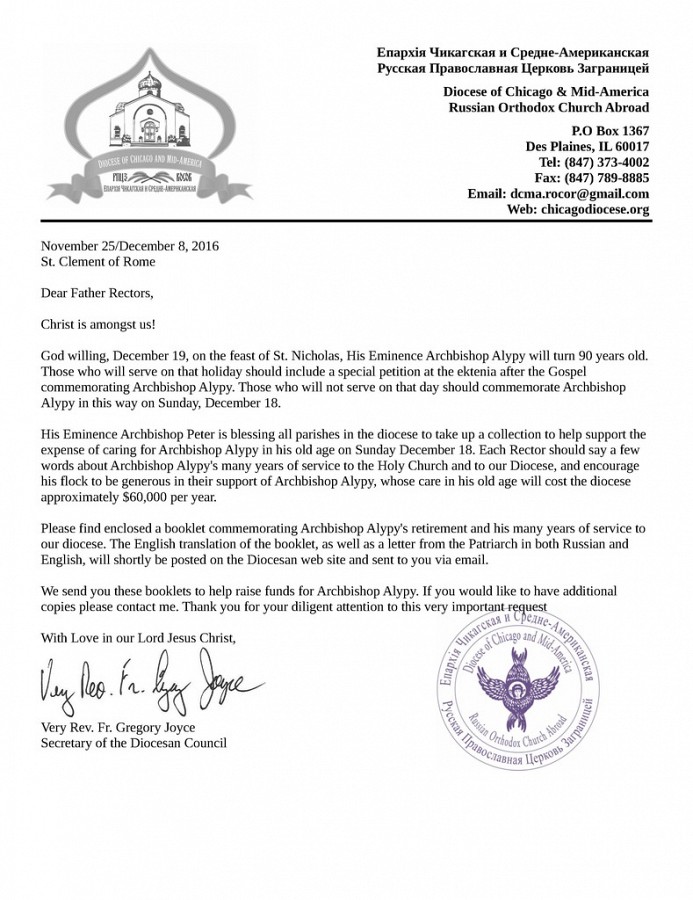 Archbishop Alypy, in the world Nicholas Gamanovich, was born on December 6/19, 1926, in the village of New Mayachka, the the Kherson province, on the day of St. Nicholas the Wonderworker. Vladyka himself writes here about his own youth:

After the capitulation of Germany the Brotherhood moved at first to Geneva, and from there, on November 13/26, 1946, arrived in the United States of America, to live in Holy Trinity Monastery, which had been founded by Archimandrite Panteliemon with the blessing and with the support of Archbishop Vitaly (Maximenko). In Geneva, before leaving for the United States, Nicholas was tonsured as a Riasaphore Monk with the name of Alypy. At Holy Trinity Monastery Fr. Alypy carried out various obediences in equality with the other brothers. However, his main work was in the icon studio where he worked under the guidance of the aforementioned Fr. Kyprian, the foremost iconographer of the Russian immigration. In 1948, together with two other novices (the later Metropolitan Laurus and Archimandrite Flor) he was tonsured to the small schema by Archbishop Vitaly (Maximenko). After completing his seminary education at the monastery, Fr. Alypy taught several subjects at the Holy Trinity Seminary: Church Slavonic, Greek, The History of the Russian Church, and others. As a result of his teaching efforts Fr. Alypy published a Grammar of the Church Slavonic Language, first published in 1964, reprinted in 1984, and translated into and published in English in 2001. In 1950 Fr. Alypy was ordained a Hierodeacon by His Beatitude Metropolitan Anastasy, and in 1954 a Hieromonk. On October 7/20, 1974, with the participation of Metropolitan Philaret, Archbishop Seraphim, Archbishop Vitaly, and Bishop Laurus, Archimandrite Alypy was consecrated as Bishop of Cleveland, Vicar of the Chicago & Detroit diocese of the Russian Orthodox Church Abroad. Following the repose of Archbishop Serahim (Ivanov) in 1987, Vladyka Alypy was appointed the ruling hierarch of the diocese. In 1990 he was raised to the order of Archbishop. In 1994 he was transferred to the Australia-New Zealand diocese, however, due to concerns about his health the Australian consulate delayed their decision about whether to accept him, and in the interim, at the intercession of the parishioners of the Protection Cathedral in Chicago he was returned to his previous position. While fulfilling his duties to the diocese, Vladyka Alypy did not forget his work as an iconographer. His Eminence at this time completed the frescoing of the St. Sergius Cathedral in Cleveland. During Great Lent of 2002, in the garden of the diocesan cathedral, Vladyka fell and hit his head on the asphalt. As a result of this he received an injury which deprived him of his ability to move independently. In order to help Vladyka, in 2003 Archimandrite Peter (Loukianoff), former Head of the Russian Ecclesiastical Mission in Jerusalem, was consecrated as Bishop of Cleveland. In June of 2016, due to his ill health, Vladyka Alypy was granted retirement by the Hierarchal Synod.

Letter of the Hierarchal Synod of the Russian Orthodox Church Abroad

Archbishop of Chicago and Mid-America

On behalf of the Synod of Bishops I wholeheartedly welcome you, our longest standing archbishop and bearer of the spirit of the famous Job of Pochaev brethren of Ladomir, with kind good wishes for good health and divine assistance! With this letter I announce with great joy that the Synod of Bishops has determined in this momentous year, with all due solemnity mark your upcoming ninetieth birthday. Longevity is the gift of God and a special mark of His beneficence. During these days of the gathering of the Synod of Bishops, dedicated to the fiftieth anniversary of the repose of St John the Wonderworker and Archbishop of Shanghai and San Francisco the Miracle-worker, when we commemorate you in prayer at the shrine of the incorruptible and multicurative relics of this wonderful patron of the Russian diaspora, the words of the prophet Jeremiah especially resonate: "Blessed is the man who trusts in the Lord." You have used this text in your life. This is the foundation on which your Church glory grew and multiplied as a sign of God's blessing on your life and archpastoral works. You expressed this faithfulness to the Lord in your monastic tonsure in the pronunciation of the special vows dedicating your entire life to the Church of Christ. This trust in divine care and help from God openned your heart during your induction speech at your consecration as a bishop. In 1974, through the grace of the Holy and Life-giving Trinity, through the election of bishops and the appraisal of the bishops of the Russian Orthodox Church, through the prayers of Metropolitan Filaret of holy memory (Voznesensky) and the host of hierarchs, the Lord, from His Paternal and Divine profundity poured out upon you a special blessing of the Holy Spirit and Comforter so that within you there might be the strength and apostolic zeal to follow the way of Divine Providence, denying yourself and taking up your cross, and preach the Gospel of Love, addressed to the whole human race, in the vast Diocese of Mid-America, for which you built and beautified the majestic Cathedral of the Protection of the Theotokos. Bowing down to Earth and expressing our most profound gratitude for the many years of assiduous service to the Church and the People of God, the Synod of Bishops blesses your well-deserved rest, determining that you are to remain on leave, with the right to stay in the Bishops' house in Chicago as a dependent of the diocese to which you gave all your strength. We thank you for the fact that you have prepared for yourself a worthy successor in the person of Peter Bishop, who has been raised to the rank of archbishop at this meeting. We thank you for generosity of your love and faithfulness to the Russian Orthodox Church, and we ask for your holy prayers for us, your brothers and concelebrants.

With unfailing love in the Lord,

Review of Metropolitan Philip of Poltava

Chair of the Department of Religious Education, Missions, and Catechism

of the Holy Synod of the Ukrainian Orthodox Church (MP)

Modern man, trying to renew his life, comes to the conclusion that it is necessary to return to traditional values. In the twentieth century century, we once again are trying to restore bit by bit the precious stockpile of the past, which was thoughtlessly wasted in the course of technical and social revolutions in the various reforms in the pursuit of material goods and in our everyday life. One of these treasures is the Church Slavonic language.

Saints Cyril and Methodius, enlighteners of the Slavs, originally created this language as a means to communicate with God. Church Slavonic was the language of Scripture and chanted prayers, of spiritual poetry and theological thought. In our time, while remaining the language worship, it marvelessly retains its original purity and sanctity accumulated by the Church over many centuries.

In order to truly connect to this ancient source of holiness and wisdom so that one not only perceives the Church services with the ears alone, but to understand with the mind and feel with the heart one needs to study Church Slavonic. To this end Hieromonk. Alypy's (Gamanovich) A Grammar of Church Slavonic provides invaluable assistance.

The textbook contains a historical overview of the development and formation of Church Slavonic, an explanation of the grammatical and syntactical aspects of the language and provides many and varied examples from Scripture and liturgical books. These are particularly valuable because they help learn Church Slavonic not in the abstract, but in the context of the liturgical tradition of the Orthodox Church. In presenting the material, the author often draws parallels with ancient Greek, English and German and in some cases refers to Hebrew, reflecting the biblical tradition of the Old Testament. The fundamental nature of this work combines with the accessibility of its explanations, and makes the book of interest both for professional philologists and theologians, as well as for those who are just beginning the path of becoming churched and have no special training.

This textbook was first published in 1964 in Jordanville, NY (USA), and has been reprinted many times. To this day it is by far the best textbook for Church Slavonic.

About his Church Slavonic textbook His Grace Alypy himself wrote the following: "Even before the classes in the seminary, I was fond of Church Slavonic. When this subject was taught to us in the seminary, I tried not to miss anything, and it was taught us by Archpriest Mikhail Pomazansky, a highly educated person. He had graduated from the Kiev Theological Academy and had a real feel for grammar and presented it skillfully. He taught us Greek as well, and some other subjects. "After graduating from the seminary and obtaining my certificate I was asked to teach Church Slavonic. "As a result of teaching for a few years I drafted A Grammar Church Slavonic. Holy Trinity Monastery published it in 1964. A second edition, with some amendments came out in 1984. Archpriest John Shaw translated my grammar into English, and it was published by Holy Trinity Monastery in 2001. In the English version I made some more amendments. Father John speaks several languages, and therefore was able to cope with this very difficult task. Many thanks to him. "I was very pleased to learn that my grammar and was found useful in Russia. In Russia there were, it seems, two reprints: in the 90s a reprint of the first, 1964, edition appeared. I was a little upset, because the 1984 edition was significantly better. I had improved some things and added others.... But it was explained to me that in 1964 there was no copyright law, and therefore this option was chosen, so that I would not be able to submit any claims. But I wasn't thinking to quarrel with anyone. On the contrary, I am very glad that my book has come in handy, that it is used, that it has found its readers ... "