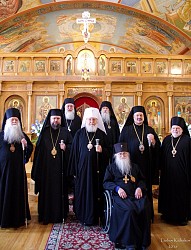 On Monday, August 16/29 and Tuesday, August 17/30, 2016 clergy from throughout the diocese and throughout the United States gathered in Des Plaines/Chicago, Illinois to celebrate the name’s day of Archbishop Alypy, retired bishop of Chicago & Mid-America. At the festive Divine Liturgy on August 17/30, the day of the commemoration of the Venerable Alypy, Iconographer of the Kiev Caves, the Divine Services were led by His Eminence Metropolitan Hilarion of Eastern America and New York, First Hierarch of the Russian Orthodox Church Outside Russia. Joining His Eminence were:

Bishop Paul of Chicago & the Midwest, Orthodox Church in America

In addition to the gathered hierarchs, 24 priests and 5 deacons participate in the Divine Liturgy. Following the Divine Liturgy a special greeting to Archbishop Alypy from His Holiness Patriarch Kyrill was read by Archbishop Peter. Metropolitan Hilarion then greeted Archbishop Alypy with the feast day of his heavenly patron and gave a short sermon to the gathered faithful on the life of the Venerable Alypy the Iconographer. After the veneration of the cross and the reading of the thanksgiving prayers after Holy Communion, all gathered in the cathedral hall for a festive meal at which Archbishop Alypy received greeting from the gathered hierarchs and guests, as well as a group of scouts from the diocesan ORPR Youth Camp. A commemorative brochure was distributed to all in attendance.

As the diocese and the cathedral parish have taken on the care of Archbishop Alypy in his elder years (God willing he will celebrate his 90th birthday this coming December), Archbishop Peter made a general call for support of the care of Vladyka Alypy and many made donations. Those who wish to support this worthy cause, but who were unable to attend the festive banquet are asked to contact the diocesan Treasurer for more information:

Donations are also accepted via PayPal.

We ask the prayers of all the faithful for the spiritual and physical health of Archbishop Alypy.