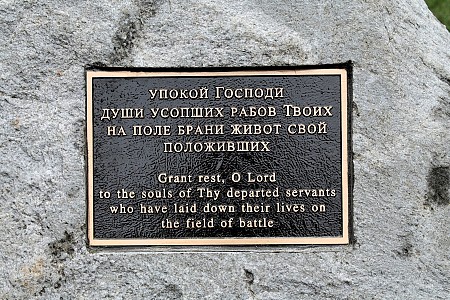 On August 29/September 11 the Holy Church commemorates the Beheading of St. John the Baptist. This is also the day appointed by the Holy Church to commemorate all Orthodox soldiers and sailors who have given their life for Faith, King, and Country. This year, 2015, marks the 70th anniversary of the end of World War II. There are very few families either in the United States or in the former Soviet Union who were not touched by this war, and many families experienced the loss of family members in this war. Therefore, the Ann Arbor parish decided that this would be an appropriate year to create a memorial to all fallen Orthodox soldiers and sailors. With the blessing of His Grace Bishop Peter this memorial was designed and created in time to be blessed on the feast of the Beheading of St. John the Baptist. The parish thanks His Grace for blessing this effort and the donors that made the memorial possible. Eternal memory to all who have laid down their lives for Faith, King, and Country!