Bishop Peter attends the celebrations of the 25 th Anniversary of the Canonization of St John of Kronstadt in St. Petersburg, Russia 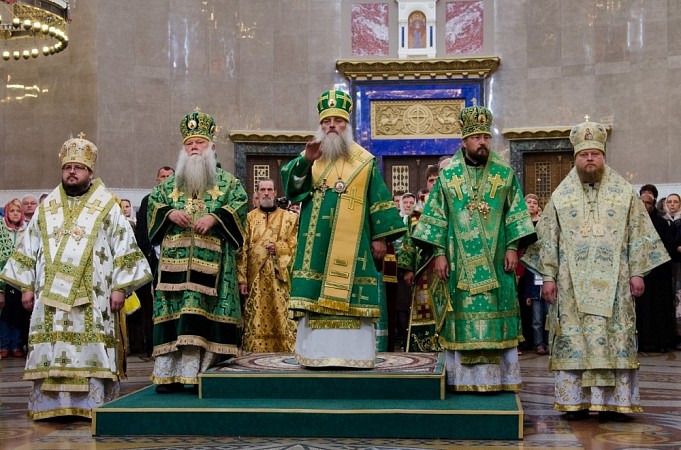 With the blessing of His Eminence Hilarion, Metropolitan of Eastern America and New York, First Hierarch of the Russian Church Abroad and His Eminence Varsonofy, Metropolitan of St. Petersburg and Ladoga, Administrator of the Moscow Patriarchate, His Grace Peter, Bishop of Cleveland, Administrator of the Chicago and Mid-America Diocese took part in the celebrations on the occasion of the 25th anniversary of the canonization of St. John of Kronstadt, and also concelebrated the Divine Liturgy at St. Nicholas Naval Cathedral Kronstadt. After the Liturgy of the city-fortress was a procession to the Vladimirsky Cathedral. Anniversary celebrations marking the 25 th anniversary of the canonization of St John of Kronstadt began on June 10, 2015, in St Petersburg, Russia. Participating were members of the St John of Kronstadt “family”—representatives of churches, monasteries, high schools, orphanages, charitable foundations and other Orthodox Christian organizations named after the saint—some 450 people from 22 nations. The celebrations began at St John of Kronstadt Stavropegial Convent, established in 1900 by St John, where his relics now lie. The celebrations continued to Sura, the Archangelsk region of Russia.