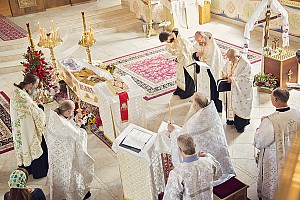 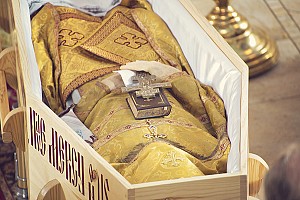 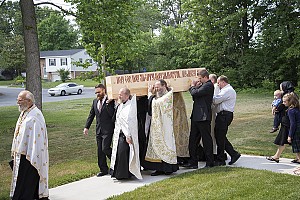 On Thursday, May 15/28, 2015 the funeral rite for a priest was served at the St. George parish church in Cincinnati, OH over the earthly remains of Archpriest Paul Bassett, long-time Rector of this community.

Fr. Paul reposed on Sunday, May 11/24 after a long struggle with Parkinson's disease. For the last three years Priest Daniel Marshall has been the Rector of the St. George community. Fr. Daniel led the Divine Liturgy the morning of the funeral. Serving with Fr. Daniel that morning were Archpriests Anastasy Yatrelis and Christopher Stade. The parish's Deacon Alexander Petrovsky also served at the Liturgy. Many of the faithful, including Fr. Paul's widow Barbara, his daughters and their husbands and children attended the Liturgy and partook of the Holy Mysteries.

His Grace, Bishop Peter of Cleveland, Administrator of the Diocese of Chicago & Mid-America, arrived mid-day and presided at the funeral. Also serving the funeral were Archpriests Anastasy Yatrelis, Gregory Joyce, and Christopher Stade, as well as Priests Daniel Marshall and Pavel Akmolin. Deacon Alexander again led the faithful in prayers for their spiritual leader of many years. Unfortunately Bishop Peter's luggage, including his episcopal vestments, were lost by the airlines. Thus, he had to wear priest's vestments for the funeral.  In his homily Bishop Peter noted Fr. Paul's extremely humble and simple nature, which was manifest from the first years His Grace met him when the future Fr. Paul appeared in Jordanville in the 1970s. These virtues were hallmarks of Fr. Paul's ministry and his life, and attracted many faithful to this community. Vladyka also spoke of the difficult illness Fr. Paul endured for many years, again with humility and simplicity. Bishop Peter also called to mind the Gospel of the Blind Man that was recently read in all Orthodox Churches and how The Lord taught us through that interaction that although most sickness is due to man's sin, this is not always the case, and sometimes, as was the case with the blind man, sickness is given for the glory of God. Vladyka noted that in his opinion Fr. Paul's sickness was just such a sickness - given not for his or another's sin - but for the glory of God and our collective edification. And Fr. Paul, faced with such an illness did not disappoint - he accepted it in such a way as to give glory to God and a good example to those around him. This was his last and perhaps most significant struggle as God's priest. His Grace noted that although Fr. Paul's death was a loss to his family and his community he was certain that they had gained an intercessor in heaven.

Following the funeral Fr. Paul's body was taken up by the serving priests and Fr. Paul's three of his four sons in law and carried around the parish church to the chanting of the irmos of the Great Canon of St. Andrew of Crete. Shortly thereafter Fr. Daniel and Fr. Paul's family began his last earthly pilgrimage - a stop in Cleveland and then to Holy Trinity Monastery in Jordanville which will be his final resting place.

Eternal Memory to the humble servant of God Archpriest Paul!