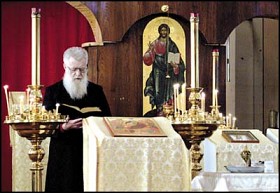 ATLANTIC MINE - Morning Nativity services were held at Sts. Sergius and Herman of Valaam Mission Church in Atlantic Mine Friday.

With candles, incense, songs and scripture readings, the service was identical to Orthodox services throughout the world, even though just a handful of people attended the service.

Orthodox churches celebrate Christmas on Jan. 7. They follow the Julian calendar which was in use at the time of Christ's birth. Subdeacon Lawrence Most, of Copper City, who presided over Friday's service, said the two-Christmas tradition began in the 14th century.

"Pope Gregory noticed a flaw in the calendar, that it had lost ten days," Most said. "Many countries and, of course, the Orthodox Church did not accept the correction at the time and most Orthodox churches still do not."

For the past decade, the 10 or so members of the congregation have called the former St. Mary's Star of the Sea Roman Catholic Church home. Prior to purchasing the church and rectory from the diocese of Marquette, the congregation met in the home of church secretary Lynn Gierke.

Most said because they are a mission church without a full-time priest, the Christmas service was a Typica, or reader service and not Divine Liturgy.

"We have services every Sunday," Most said, "with visiting priests coming monthly for Divine Liturgy and communion."

Most said priests come from Lower Michigan to serve at the church.

Currently, Orthodox congregations in Ironwood and Iron Mountain have their own priests. Gierke said while the church is currently classified as a mission church, that status could change.

"We are a mission church. Our mission is to keep Orthodoxy alive in the Keweenaw," she said.

"However, our mission church status could change because our bishop is considering giving us a full-time priest."

The mission is a parish of the Russian Orthodox Church Outside of Russia.

The ROCOR was formed in the aftermath of the Bolshevik Revolution of 1917. The church was outlawed and many priests were evacuated out of Russia.