Trying to backtrack to where it all started, I unearthed an email from the Diocesan Secretary Archpriest Gregory Joyce, saying: “XB! Let's talk when you can”.

So, yes, it was the Monday of the Third Week of Pascha when Fr Gregory forwarded me a letter from Bishop Nicholas of Manhattan asking someone in the American Midwest to help a young girl who needs surgery in St Louis. Then Anna Powers, a parishioner of the Synodal cathedral, went over the facts: “Sophia is a 9 year old girl with Cerebral Palsy. There is a physician in St Louis who is a renowned specialist and does surgeries that change children’s lives. The cost of the surgery is far beyond the family's capacity. In addition to that, they would need accommodation in St Louis and help with getting around, etc. Perhaps there is a family in St. Louis that can host them? Also, perhaps this donation campaign can be circulated among the community? I am sure Sophia and her Mom would greatly appreciate it, and this is a unique opportunity for us to partake in something that will be truly life changing and literally help Sophia walk.”

Of course, we could host the family, provide transportation and any other assistance the family would need. But could we do more, since the Selective Dorsal Rhizotomy surgery has a price tag around $50,000.00 and the family is struggling to raise even a portion of the needed amount?

The first step was to ask Archbishop Peter for his blessing for the St Basil the Great Orthodox Church in St Louis to start collecting funds to help pay for Sophia Rovnova’s surgery. Vladyka blessed our efforts and the parishioners started dipping into their savings to help Sophia walk. But $50,000.00 is a very serious sum and, despite of the generosity of many people both in the parish and outside of the community who heard about Sophia, the fundraising could have lasted for a couple of years, while the timing for the surgery is crucial: the earlier the surgery is performed the higher are the chances for a successful outcome.

On the feast of the Dormition of the Mother of God a man who was seriously contemplating conversion to Holy Orthodoxy told me that he would like to make an anonymous donation to help cover Sophia’s surgery. Little did I know at the time that that quiet and humble man would contribute the remainder of the needed amount.

It is one of the joys of the priesthood – to witness God’s miracles and meet the people who become instruments of God’s Will.

On November 8th, Sophia with her father Igor and mother Ludmila, having made a long trek from their small hometown of Slavgorod in Altai Region – via Novonikolaevsk (now called Novosibirsk), Moscow and New York – arrived in St Louis. The little girl was successfully operated on by world-renowned neurosurgeon Dr. Park on Friday, October 12th, and was discharged from the hospital six days after.

Igor and Ludmila still cannot bring themselves to believe that the fearsome diagnosis they thought their daughter would have to live with for the rest of her life and, most likely, would have institutionalized her after they, her parents, pass on to the next life, is in the past.

Now Sophia Rovnova has a long path of rehabilitation and physical therapy to strengthen her muscular system, to finally say good-bye to her wheelchair and to walk. 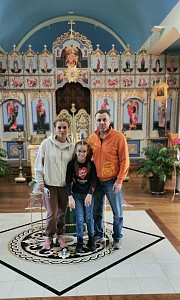 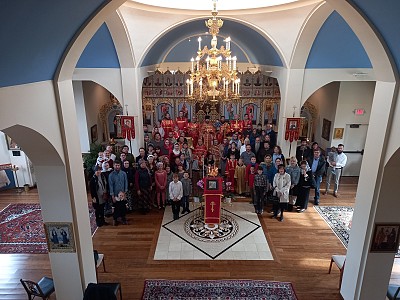