The successful defense of the first Doctoral Dissertation in Theology at St. Petersburg State University since the Theological Faculty was closed in 1918 (the university was previously called St. Petersburg Imperial University) took place on July 1, 2019. More information in Russian (an English translation will be provided here as soon as possible) can be found here: http://www.uchkom.info/novosti/5840/

The successful candidate is Reader Aleksandr Andreev, 2013 graduate of the Pastoral School of the Diocese of Chicago & Mid-America. “This is a very significant accomplishment for Aleksandr and something that our Pastoral School can be thankful for – that one of our graduates was prepared adequately to go on to pursue higher theological education within the structure of the Russian Orthodox Church and to be so successful in that pursuit”, said Archpriest Gregory Joyce, Dean of the Pastoral School. “It is our hope that our students will continue to take what they have learned in the Pastoral School – that rigorous and solid foundation of theological education that we provide – and build on that as clergy, educators, and academics in service to the Holy Church.” It is hoped that Aleksandr will eventually return to serve in the Diocese of Chicago & Mid-America.

Aleksandr currently serves as Senior Lecturer in Classical Languages at St. Petersburg Theological Academy, where he teaches Church Slavonic, Greek Paleography, and History of Russian Worship. He also teaches Liturgics at the distance educations programs at the Pastoral School and at Holy Trinity Seminary in Jordanville, New York. 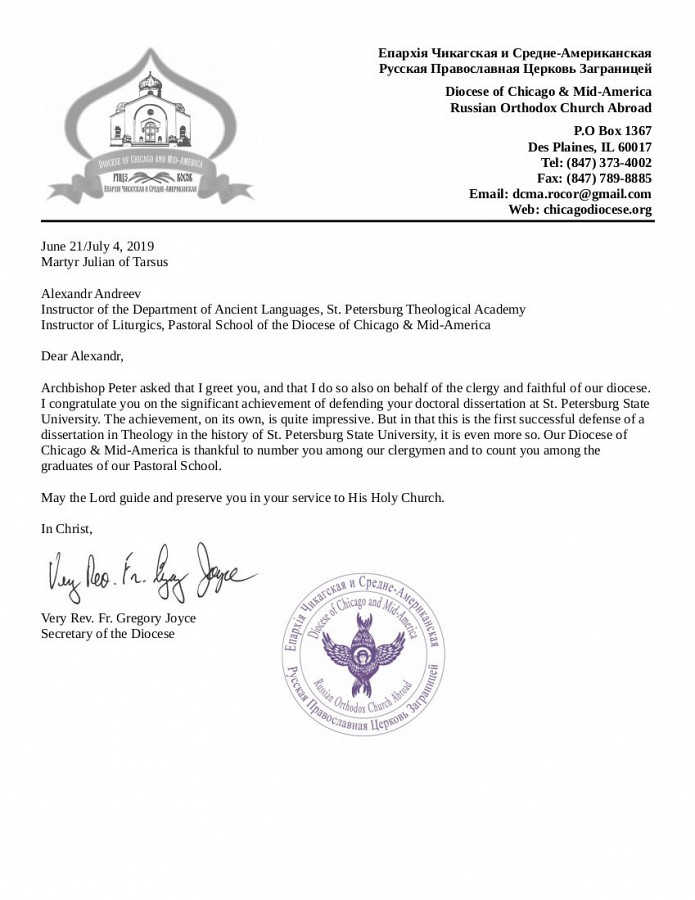