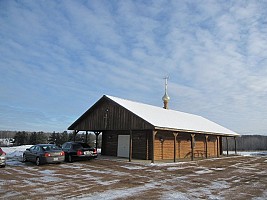 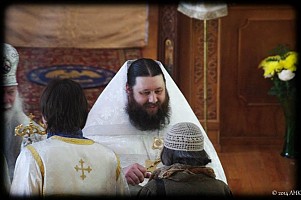 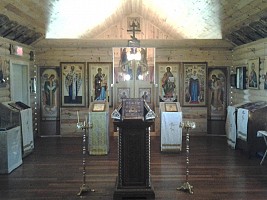 It's been seven years since the first Orthodox mission was established in the greater Wausau area near Marathon City. It was ministered on an interim basis during those years by Father Vladimir Lecko of Minocqua, whose dream it was to someday see it become a church. That dream is now being realized but with a different leader.

The Kursk-Root Icon Orthodox Mission has received a new and fulltime priest - Rev. Edward Batchko. Following his ordinationat the Holy Virgin Protection Cathedral in Chicago, Father Edward was assigned to the Kursk-Root Mission. Since arriving there in late June with his wife and four children and settling into to a Wausau residence, he has immersed himself in setting up weekly schedules of services including Vespers on Wednesday and Saturday evenings and Divine Liturgy every Sunday morning at 9:30, as well as feastdays.

The church is located three miles west of Marathon City, a  log cabin style church. Directions can also be obtained on the church's website: www.orthodoxwisconsin.org. As Father Lecko and his wife Virginia move into a richly deserved retirement, they take with them a deep affection and boundless appreciation from the congregation for their diligence of service in keeping the mission on its path to becoming what it now will become, a new church and parish.