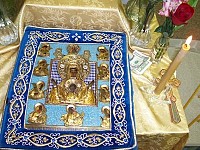 It was a great blessing for the Orthodox people of St. Louis to receive the miracle-working Kursk Root Icon of the Mother of God from April 1st through April 7th. On Friday, April 1st, the clergy of St. John Chrysostom Russian Orthodox Church (House Springs, MO) received the Icon in Columbia, MO, at the Russian Orthodox Mission of St. Mary of Egypt, following a Moleben served by Priest Anthony Nelson (St. Benedict Orthodox Church, Oklahoma City, OK), who had traveled with the Icon to parishes in Oklahoma and Kansas during the previous week. Upon arriving in St. Louis that evening, the Icon was taken to St. Nicholas Greek Orthodox Church for the service of Small Compline and Akathist to the Mother of God (as is customary in Greek parishes during the first four weeks of Great Lent), served by the parish clergy, Priest Doug (Dionysios) Papulis and Protopresbyter George Nicozisin, and the clergy of St. John's, Priest Christopher Stade and Deacon Matthew Williams.

Following the service, the Icon was taken to the home of Priest Martin Swanson, rector of St. Basil the Great Orthodox Church. Fr. Martin is recovering from recent surgery. The Icon was present at St. Basil's Saturday and Sunday, where services were conducted by Schema-abbot George (Schaefer) (Holy Trinity Monastery, ) and Hieromonk Seraphim (Voepel) (Hermitage of the Holy Cross, ).

With the Icon present, Lenten Vespers on Sunday evening and an Akathist Hymn on Monday evening were served at . During the week the Icon was also received with great joy in the homes of many of the faithful.

Tuesday evening the Icon was brought to Assumption Greek Orthodox Church. The Paraklesis (Moleben) to the Mother of God was served by the rector, Priest Joseph Strzelecki, and Priest Dumitru Macaila (St. Constantine and Helen Greek Orthodox Church, Belleville, IL), and the clergy of St. John's. Over three hundred of the faithful were present.

The Icon returned to for the services of the Annunciation on Wednesday evening and Thursday morning, served by Abbot Ioann (Magramm) (Holy Resurrection Skete, ) and the clergy of . Priest George Gulin (Holy Protection Orthodox Church, travelled with his family nearly three hours to be present during the Liturgy. Following the Diving Liturgy, Fr. Ioann, drawing on his many years of experience with the Icon, gave a short talk in which he mentioned several interesting and informative details about the Icon. A festive dinner was served by the parish sisterhood to the many parishioners and visitors, after which Fr. Ioann flew with the Icon to .

It became known that a certain Greek Orthodox woman travelled a considerable distance to pray during every service at which the Icon was present. Such was the consolation and joy the Mother of God brought to the Orthodox people of .

O Most Holy Theotokos save us!